The Regional District has requested that Island Timberlands cease all operations on DL 3040 (Stillwater Bluffs) while they enter into negotiations to acquire it for a regional park.

Please write to them and say thank you. This is a great first step.

As you may be aware, the Powell River Regional District has identified District Lot 3040 Powell River as one of six regional park acquisition objectives through its Regional Parks and Greenspace Plan. In recent conversation with local Island Timberlands staff, the Regional District has been made aware that planned logging operations on the property would be deferred if the Regional District entered into meaningful discussions about acquisition of the property. Please take this letter as formal confirmation of this intent with the expectation that Island Timberlands will immediately cease all planning and harvesting activities on the property. As I expect you will understand, any harvesting of the standing timber on the property will adversely affect our subsequent acquisition negotiations.

The length of the proposed deferment of planning and harvesting operations will need to be further defined to our mutual satisfaction. Our staff is ready to meet with the appropriate Island Timberland staff at a time and place of your choosing to complete this detail and start confidential discussions about acquisition of the property. It is suggested that this meeting should be a priority to give you confidence of our seriousness and not to unnecessarily encumber or delay your corporate operations.

Thank you for your staff's offer of the deferment of operations and I look forward to a progressive and mutually beneficial negotiation of our acquisition of the property.

cc: Wayne French
Posted by Friends of Stillwater Bluffs at 08:59 No comments: 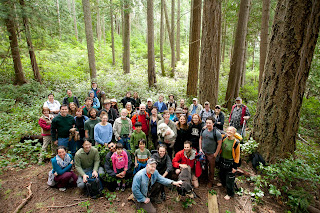 50 plus people came out to Stillwater Bluffs and hiked in support of this area becoming a regional park. Ken Wu, TJ Watt and Chris from the Ancient Forest Alliance walked with us. Friends of Stillwater Bluffs and the Ancient Forest Alliance are working together to ask Island Timberlands to lay off contentious lands for now so that these lands can be purchased and protected. Also for the Provincial Government to pony up some money as part of a Parks Acquisition Fund so that these lands can be held protected for years to come. Thank you all for coming out.

If you missed the hike but still would love to support this campaign it's easy. Call or write to the Regional District and thank them for starting the negotiations with Island Timberlands and tell them that there constituency is noticing.

The Powell River Regional District Board met this Tuesday (April 10) and was presented with a Friends of Stillwater Bluffs delegation.  New information regarding the now imminent plans of Island Timberlands was presented.  At the end of March three of our members were invited (upon request) to walk part of DL3040 with Wayne French, I.T.'s forestry representative for Powell River.  During this walkabout it was stated that IT would be in this area flagging and tagging trees with spray paint for block and road layout this April.  This new fast tracked schedule was a shock and our group quickly requested a meeting with Mac Fraser, Chief Executive Officer of the Regional District.  Mac would be absent for this upcoming Committee of the Whole meeting so Friends of Stillwater Bluffs took this new information to present at that meeting.

David Moore's pitch to the board was simple and clear, "please communicate with I.T. management that the RD is considering DL3040 for park - and please stop any onsite operations pending further development".  No director offered any directive at this point.  David (of FOSB) then reiterated to them that Wayne French was going full steam ahead with harvest planning and because Wayne and I.T. have received nothing from our Regional District and in particular the meeting our Regional District had with I.T. in March was not with management, but with lower level functionaries.

One other request FOSB presented was a letter that a board member from Cortez Island had written and submitted to I.T. that resulted in a six month ceasing of operations.  Our request was for a similar letter to be written on behalf of DL3040.  This request was not taken enthusiastically and it took City Councilor Maggie Hathaway's outburst of, "Let's just write the letter!  They can say no but at least we can write a letter."  She was then asked by the chair if she would like to put that in a motion.  She did and it was unanimously passed.  THANK YOU MAGGIE!!  We will wait to see what results this letter will yield to us.
Posted by Friends of Stillwater Bluffs at 08:55 No comments: